30 children from The Soma Leo Academy were selected to join an event in honour of President Barack Obama’s visit to Kogelo in Kenya in July 2018.

The invitation to attend the event was borne out of a partnership between The Soma Leo Foundation and The Mama Sara Obama Foundation, after a meeting between the Trustees and Mama Sara Obama in September 2015. This led to Soma Leo sharing the contents of its container delivery, following a Christmas appeal, including computers, laptops, stationery, books and a printer. The two Foundations share a similar mission to help young people in Kenya thrive.

The children and their teachers travelled from Nyiera to Kogelo for the event, and were among the guests who welcomed the former President on this private visit, where he helped his sister, Dr Auma Obama, to launch her sports and vocational centre. 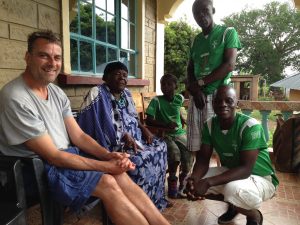